* For now we have no open call. Stay tuned

History of the grants

In Ambulante we are convinced that documentaries sow seeds. One of our main objectives is to discover new talents and promote the training of Mexican filmmakers and the exhibition of their work in the national and international markets.

Since 2001, Ambulante has supported the production of Mexican documentary filmmaking through its post-production grants. First, and during six years, it did so with the Gucci Ambulante Grant, which supported projects in editing process and required funds for finalizing for an amount of $400,000 Mexican pesos. This grant was specially looking for projects related to social issues and supported great Mexican movies, such as Presumed Guilty, Those Who Remain, El General and Tracing Aleida. Said projects were screened in various festivals—both Mexican and foreign—reaping important awards and putting Mexican documentary filmmaking on the map as one of the most interesting and purposeful ones globally.

While it is true that the number and quality of Mexican documentary projects have risen, it is also worth stressing that there is very little support specifically aimed at this genre, so Ambulante’s grants have significantly helped to fill this gap and allowed for films to successfully reach the stage of a first cut and to be shown in different film forums.

In 2012, Ambulante formed an alliance with Cuauhtémoc Moctezuma to continue supporting in the same way projects in the post-production stage, being this its second year of existence. The Cuauhtémoc Moctezuma – Ambulante grant was centered on projects about subjects related to the environment, sports, art, culture and laboral aspects, and it supported documentaries like Ruin (dir. Roberto Fiesco), Elevator (dir. Adrián Ortiz), Apart (dir. Pablo Tamez) and, Bering. Balance and Resistance (dir. Lourdes Grobet). It is worth noting that the four projects are the opera primas of their directors, which makes this grant an important boost for emerging directors.

Carrying on the mission to discover, share and transform the world through stories, in Foundation Banorte and Ambulante Beyond, Mexican filmmakers were called to compete for a production grant for a documentary short proposing a new outlook on women, whose stories lead to acknowledging them as decision-makers, source of inspiration and an example of strength. The call received 116 projects, from which the following were selected: Magda o el Pueblo de los Pescados (dirs. Dahlia Sosa Hernández, Xareni Zafra Gatica), La Abogada del Pueblo (dir. Federico Alan Villareal) and Pórtate Bien (dir. Omar Zamudio). Said documentaries are part of the 2017 Tour.

Other examples of supports:

Ambulante and Foundation W.K. Kellogg call on filmmakers to submit proposals for financial support going towards documentary filmmaking focused on the black population and culture in Mexico.

The grant will support documentaries that are in the production or post-production stages and require economic support. 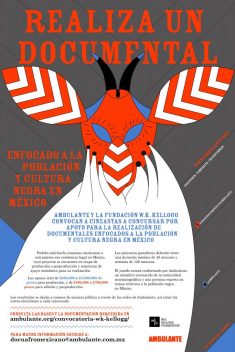 Mexico City, June 9, 2017: This year, Ambulante called Mexican filmmakers residing in Mexico to compete for funding the filming of five short films in any genre—fiction, documentary or animation—regarding the accusatory criminal justice system.

The selected projects will contribute to make visible the rights of people in victim situations and accused in the criminal justice system, as well as the deep changes that some of the main law enforcement actors (the Public Prosecutor’s Office, attorneys, judges, experts and prosecutors) have experimented while on duty.

The call received 27 proposals. The jury was made up of Christiane Burkhard (filmmaker), José Antonio Guevara (executive director of the Mexican Commission for the Defense and Promotion of Human Rights (CMDPDH, by its acronym in Spanish) and Paulina Suárez Hesketh (general director of Ambulante), who were called by the Documentary Training and Production Direction of Ambulante A.C.

The selected projects are:

Lupita Pérez is a pioneer in training interpreters in the accusatory criminal justice system in Chihuahua. Following the trajectory that took her from her place of origin, in the Sierra Tarahumara, to the prisons where she assists the interns who speak her tongue, the documentary explores her capacity to face the system’s inequalities through listening and dialogue.

Unjustly incarcerated for drug trafficking, Goris meets Jorge Correa in prison. Now as a couple, they both work in the prison theater. He will direct her in a monologue about her own life. Will the new criminal justice system allow more people to have a happy ending?

Marisela Escobedo fights to have behind bars her daughter’s, Ruby, killer, cruising through the deficiencies of the newly established criminal justice system. However, the killer, Sergio Barraza, walks free after the authorities’ incompetence to form a case.

The Lights of Criminal Justice

A little less than a year since the implementation of the new criminal justice system, many voices have spoken for or against its true effectiveness. This documentary seeks to share, from a visual dialogue between reality and animation, examples that allow us to identify when does it work, through relevant stakeholders in the administration of justice.

A young Raramuri is held and murdered by cops in Ciudad Juárez. His community and family have no hope in justice being done, but a young lawyer takes the case and convince them to go to the oral trial to condemn those guilty.

Ambulante congratulates the winning production companies and thanks all the other ones which participated in the call.

The selected production companies will receive a brief notification via email indicating the continuation of the procedure.

By unanimous decision of the jury, no feedback will be given to the projects which were not selected.